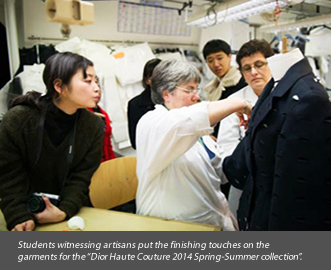 Together with delegates from other schools, they visited Dior’s ateliers on Avenue Montaigne
and saw first-hand how the haute couture artisans painstakingly finish the intricate garments
that would become the central motif of the collection for the haute couture show. The delegates
were also given a tour of Dior’s headquarters as well as informative lectures on the maison’s
culture and history by the CEO, Sidney Toledano, and the Archivist, Soizic Pfaff.

This trip also gave the Raffles Fashion Designers the rare opportunity to interact with couture designers and other students who share the same passion and talent in fashion design. At the workshop, they met designers from other LVMH houses such as Louis Vuitton and Celine, who shared their experience with the students. The highly anticipated event of the Paris trip was undoubtedly the couture show, which took place at the Musée Rodin. Although the students had a sneak peek of the collection at the workshop earlier, they were still excited to see the completed haute couture, accentuated with exquisite accessories, on the runway.

“This is a once‐in‐a‐lifetime experience!” Xu Yingjin exclaimed. “The show is spectacular. I think
this Paris trip will have a huge influence on me and my design.”

The Raffles Fashion Designers could hardly conceal their undeniable excitement. Fu Yuji expressed his desire to become a top designer in the future. “Of course, I need to study harder to achieve that,” he said.

Wu Die realised the importance of English when she communicated with students from other schools. “Everybody is communicating in English. A designer needs to express a concept effectively in English. As a design student, it is crucial to master a foreign language.”

From Dior’s perspective, the point of this grand gesture was to share the passion and savoir‐faire of haute couture to a new generation of would‐be fashion designers. The exclusive invitation by Dior has proven Raffles Shanghai’s standing in the industry. This is another successful milestone of the school’s strong partnership with the industry to groom students into leaders of tomorrow. Raffles Shanghai will continue to excel and strive to nurture more new design talents for China’s fashion industry. 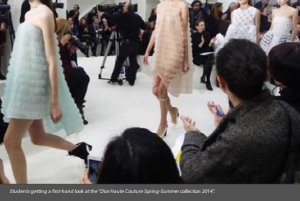 View all posts by visionpreneur